This article gives a brief overview of the main components in cabling office networks.  It is intended to aid investigating issues with patching, cabling and identifying network connections.

The sole aim of the cabling is to connect equipment together.

Wired internet connections to computers are usually provided through Cat5e (or Cat6) cables (often called network, ethernet or RJ-45 cables) - these have RJ-45 plugs on the end with clips to keep them in the sockets.

Important - ADSL telephone cables have very similar plugs to ethernet cables, but are not as wide.  These are called RJ-11 plugs and will fit into network sockets.  Network cables will not fit into telephone sockets though. 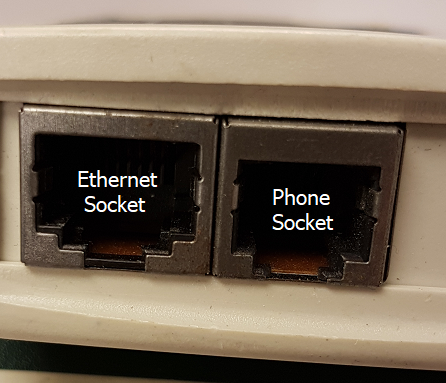 Network cables are most often seen connecting equipment together inside offices.  They can also run through the walls and floors, to connect different rooms together, and these internal cables will start and finish at sockets mounted in the wall or floor (commonly referred to as wall or floor ports), or in a patch panel.  A patch panel is just a row of sockets - these sockets are not linked to each other, and there are no lights or power on the panel, which is more like a cable tidy - on the back of the patch panel there will be one cable per socket which goes off to another socket located elsewhere.  These generally go to wall or floor ports in the building, but can go to other patch panels.  Patch panels are found in comms rooms and cabinets, mounted in racks.  They are part of the cabling and not to be confused with switches or network equipment.

Labelling - An important part of cabling is labelling on both ends of the internal cables which run through the building.  As there is no way to physically follow the cable from start to finish Patch panels and wall and floor ports should be labelled so that you can identify which cable runs where.  Generally the port in the office will be numbered, and the corresponding patch panel socket will have the same number, and also the room number. 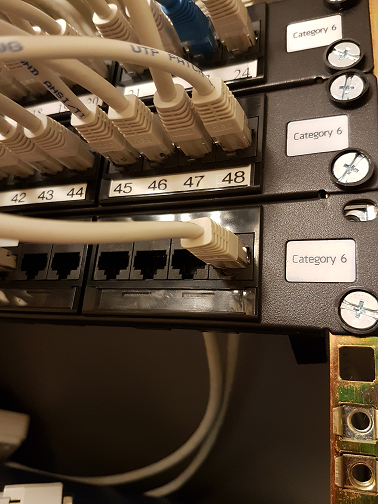 Another way to connect to the internet is through a wireless network.  There will be a device which broadcasts the wireless signal (a Wireless Access Point or Wireless Router), and this is what your computer will connect to.  The wireless network will have a name (also called SSID) and can either be secured with a password or be open.

These wireless devices will ultimately need a wired internet connection in order for them to get internet, unless they use a sim card to connect directly to a mobile phone network.

Cabling on its own can only connect two devices together - In order to connect more than two devices to a network you need to use some of the following equipment:

Some devices (most commonly VoIP phones) can be given power through their network connection - this is called Power over Ethernet (PoE).  To get power these devices need to have their network cable connecting into a PoE switch or power injector.  A PoE switch will have some ports (not necessarily all of them so check the labelling on the switch) which give out power as well as acting like a switch.  A power injector is a small device which has a power supply and is inserted in the network cabling to introduce power (one network socket is connected to the network, or LAN, the other network socket connects to the device needing power, labelled PoE in the picture below).

Important - There must be no networking equipment between the PoE switch or power injector and the device needing power, only cabling. 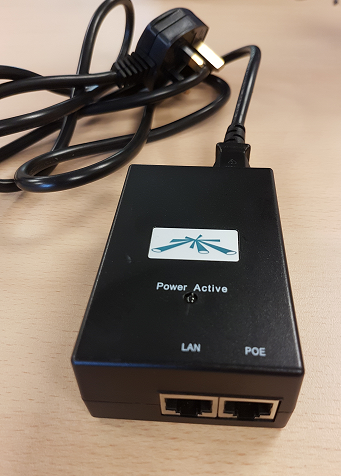 VoIP phones (Voice over IP) use network connections to work (unlike analogue phones, which need telephone cables) and need a network cable and power either from a separate power supply, or via PoE.  Phones need to be provisioned - this is where they are given the details of their extension and login credentials to allow them to work.  This can be done manually by IT or automatically over the internet, by talking to a provisioning server.  Most serviced offices will use provisioning servers, and the phones should not be behind client routers as this stops them from talking to the server.

Each device which can be connected to a network (wirelessly or wired) will have at least one MAC address - this is the serial number of the network adapter in the device.  The IT helpdesk can often use this information to search for a device on a network.  Routers, WAPs and VoIP phones will have the MAC address printed on their case.  To get the MAC address from a computer  you can open the command prompt from the start menu (type cmd in the start menu) and then type ipconfig /all and press enter - lots of information will be listed and the MAC address for each network adapter is listed under Physical Address.