At user-level, network switches are simple devices that form the core of a network. The picture below shows that you can make a LAN by configuring the computers and connecting them to a switch. 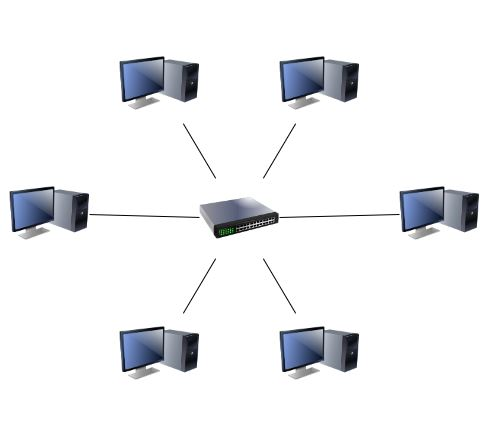 Switches can be used to do very clever things like VLANs and subnets, but that is for another article.

So what are PoE switches? PoE stands for Power over Ethernet, this means network devices requiring low power can have reduced cabling by taking their power from the same cable that carries the data (an Ethernet or network cable). A PoE switch has power available on its data connections. VoIP phones are a classic example of this. In fact, VoIP phones usually act as a small switch as well, by being able to carry the data connection onto a computer if required.

What's a VoIP switch? There isn't really any such a thing as a VoIP switch - VoIP phones just need an Ethernet connection and power. However, a switch that has PoE on all its ports is the most useful type of switch for a phone network because none of the phones would need external power supplies; this might then be referred to as a VoIP switch.

See also A Simple Overview of How Networks Work.